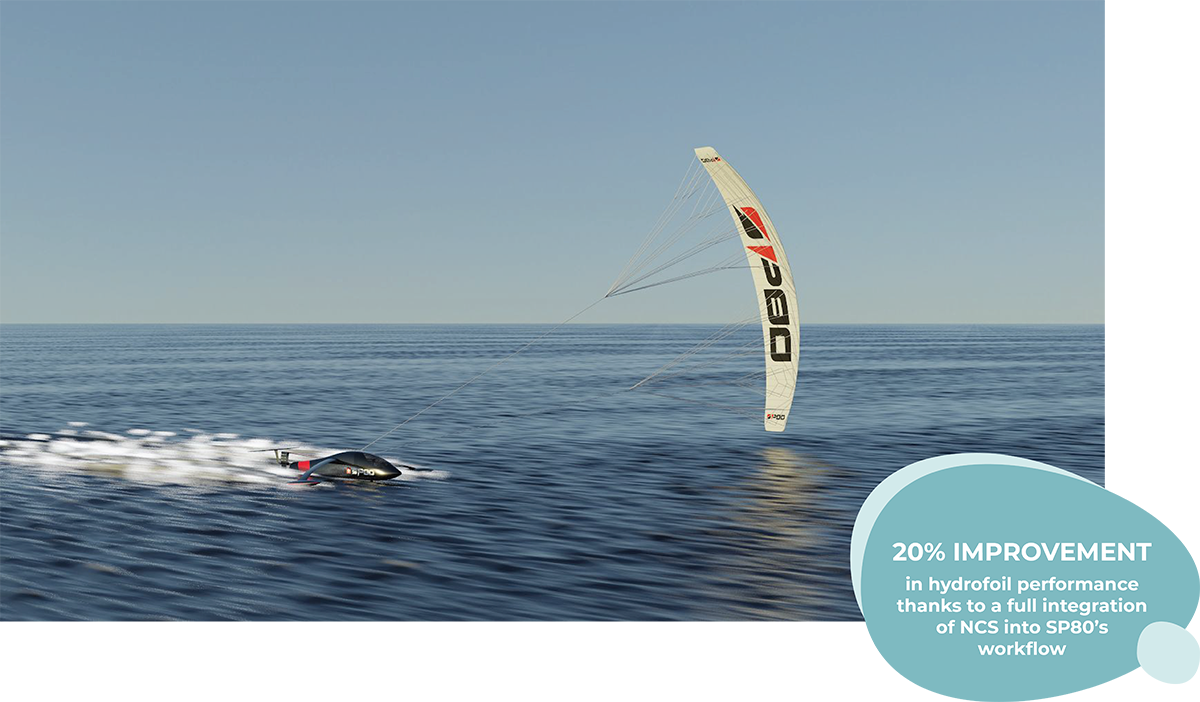 Neural Concept is on a mission to guide engineers towards radically better designs while speeding up their workflow. In this article, you will discover how SP80 managed to improve their ventilating hydrofoil performances by more than 20%, using Neural Concept Shape (NCS) in their standard design workflow, and thus breaking the world sailing speed record in 2022.

SP80 is a team of EPFL engineers and students gathered to build a boat capable of reaching 80 knots (150 kmph), propelled solely by the wind. In order to achieve this goal, the usual sailing codes have to be rethought, especially from a hydrodynamic point of view. Indeed classical sailboats foils are stuck at speeds of 50kts (around 100 kmph) due to a phenomenon called cavitation. At such speeds it becomes impossible to avoid liquid water from transforming into vapor, thus generating big instabilities that keep boats from accelerating further.

SP80 is therefore working on a technology called ventilation. Instead of classical tear-drop shaped foils, their foil profile will be wedged shaped. This kind of shape helps create an air bubble around the low-pressure side of the foil (the one that would cavitate on a classical foil) that is big enough to avoid any instabilities and therefore allowing the boat to break the 50kts barrier.

In order to get the best out of these ventilating hydrofoils, Charles de Sarnez, head of hydrodynamics department at SP80, has set up an optimisation framework based on cavitation tunnel tests coupled with numerical simulations, all powered by artificial intelligence thanks to Neural Concept’s software.

The first step was to build a numerical model capable of accurately predicting the performances of the ventilating hydrofoils. This could be done thanks to ANSYS Fluent software on the advice of CADFEM and the use of a cavitation tunnel to experimentally validate the model. The optimisation process could then start : a dataset of a several hundreds of high fidelity simulations was generated and the obtained results could then be used to train a deep-learning model, SP80 having chosen to use artificial intelligence to optimize these profiles.

Neural Concept’s deep learning model is at the heart of SP80’s hydrofoil development as it allows the team to generate and characterize hundreds of types of profiles numerically before isolating the most promising ones to have them tested experimentally in a cavitation tunnel for final validation. Thanks to NCS, the team can thus explore paths they could not have been able to explore in such a short period of time and make sure the best profile will be chosen. This approach has already generated a gain of more than 20% on the hydrofoil’s performances directly translating into a maximum speed increase of several kph. But ventilation remains a pretty unexplored field of hydrodynamics and a lot still has to be invented.

Neural Concept featured in the top 100 most promising AI startups

The Importance of Uncertainty Quantification for Deep Learning Models in CAE

Download the Industry Briefing
Oops! Something went wrong while submitting the form.
This site uses cookies to optimize the user experience.
Accept